Skoone Activity Belt area, Tallinn’s pilot site in Baltic Urban Lab project, is located in city centre, surrounded by medieval old town, Kalamaja area with valuable milieu, the central railway station, passenger harbour and Telliskivi Creative City. It is in an attractive location in the middle of many vital areas of the city, thus involving a great public interest and development potential. It consists of two different areas by its nature: former industrial buildings and the baroque fortification building (Skoone bastion - under heritage conservation) with its surrounding area. The area is partly inside the old town UNESCO heritage conservation area.

Main objective was to activate and redesign the underused Skoone bastion area, which has a great potential to be developed as a human scale and attractive public space. Another objective was to involve stakeholders in an early phase of the regeneration process. The area locates between Tallinn east-west motorized traffic roads (Põhja pst, Rannamäe tee) and next to major intersection (Põhja pst-Mere pst). An important task was to improve connections of the pilot site with surrounding urban space (residential area, old town, harbour and railway station). This required reassessing the existing traffic solutions and reaching common understanding between different stakeholders on how to improve the traffic situation.

The Skoone Actitivity Belt Structural Plan was prepared on close collaboration with a variety of stakeholders. City of Tallinn started the involvement process by mapping stakeholders as well as their visions regarding the pilot site. SWOT analysis concerning the pilot site was also conducted. Initial structural plan was drafted taking into account the stakeholders needs for the area.

In addition 2 surveys for the local pilot site were carried out to gather relevant information for the structural plan and enable the public consultation on about the plan:

During the process, collaboration with university students from Tallinn University took place. Urban Planning project course focusing on the pilot site was organized. The students’ works are available at   http://www.tallinn.ee/est/baltic-urban-lab/TLU-linnakorralduse-magistrantide-tood-2017.

A new involvement mobile application was prototyped, the application is called AvaLinn (eng. OpenCity) that stands for transparent city planning. Carrying out first idea gathering on the pilot site.

After the idea gathering urban planners organised meetings with stakeholders:

Urban planners foresee new street design in the area to indicate that pedestrians have a priority (eg. calmed traffic 30km/h and raised crossings). As it is a densely populated and growing area in Tallinn, the only way to meet the growing need for mobility is to improve public transport, cycling and walking options. Urban planners want to implement Bicycle Strategy in the area. Debate about car parking is ongoing.

2) possible investors for underground parking of the Railway Square;

During the idea gathering few interested people contacted urban planners to discuss their ideas about Skoone hill. Cultural Temple concept includes temporary cafe and public building for events atop Skoone hill. It is a community initiative but needs futher agreement with Tallinn Heritage Protection Department as Skoone Bastion is UNESCO site. In 2011 there was a temporary building (NO99 Straw Theatre) for 6 months on Skoone Hill. It was very well accepted and activated Skoone hill.

Cultural Temple could be something similar, with the content from the local community members. It aims to create a site for families with numerous events and workshops.

From May to September 2017 temporary community garden idea was implemented in the pilot site (Skoone bastion). Along with the Kopli tramline reconstruction, old tramline corridor was transformed to a light traffic road "Tram Cultural Mile". This is another temporary use of vacant land in the pilot site.

Tallinn project team worked on finalizing the pilot site structural plan. It required many updates and improvements e.g. pictograms and color adjustments to make the plan easily readable and understandable to wider public.

Workshop to discuss Põhja puiestee traffic solution was carried out in June 2018. Infact, traffic is the most conflicting issue of the pilot site. City planners foresee three alternative traffic solutions knowing that none is perfect and need further discussion with stakeholders. As a result, an agreement on short term and long term interventions was made within stakeholders and urban planners. Political commitment to the interventions will help to implement the structural plan in coming years. 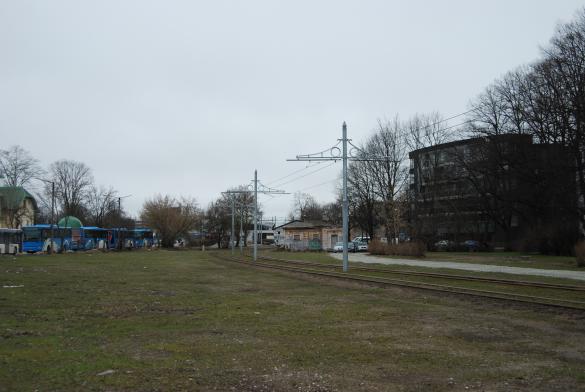