In this respect, the work of VASAB “Visions and strategies around the Baltic Sea 2010” is seen crucial. The VASAB Long Term Perspective for the Territorial Development of the BSR emphasizes importance of improving networking in the field of spatial planning between local authorities and creation of common tools and methods. VASAB sees that the transnational cooperation in spatial planning provides a substantial added value to policy sectors like urban networking.

Particularly regarding the brownfield regeneration, no common legislation for the sustainable use of soil exists on the European level. However, in the EU more than 1,000 km² every year are subject to 'land take' for housing, industry, roads or recreational purposes. The Roadmap to a Resource efficient Europe (2011) has a set a goal of no net land take by 2050. In order to be achieved, this goal has to be recognized also on the local level, for which the reuse and remediation of brownfield land is one of the cornerstones.

The cross-border relevance of the Baltic Urban Lab project

The challenges Central Baltic cities face in revitalizing urban space, are similar across borders. The issues of land ownership and the technical, geological, and financial difficulties of remediating contaminated land as well as questions about responsibility, remain some of the main challenges involved in brownfield redevelopment. In addition, there is a need to better involve citizens and other actors in the development of these areas to address issues of liveability, equality and cultural heritage. And establish public-private partnerships, involving cooperation between municipalities, landowners and developers to secure implementation of brownfield projects.

Yet, common, structured approaches for brownfield redevelopment on national, regional and even local level are missing. Baltic Urban Lab has published a policy brief and a brochure regarding the planning systems and legislation regarding brownfield redevelopment in different Central Baltic countries. Findings from the studies show that integrated national approaches combining environmental soil management with urban development are rare in the Central Baltic region. This may pose a challenge for brownfield redevel­opment in the region, and there is a need for more integrated or holistic approaches to promote cooperation between experts responsible for soil remediation and urban design.

There are no commonly agreed European definitions on what a brownfield is. Baltic Urban Lab has adapted the definition developed by several European brownfield projects, the last version originating from Cabernet Networks work to reflect better today’s challenges.

The definition and recommedations are included in Memorandum of Understanding between the project consortium. These are also available in:

Knowledge and lessons learned from the project are to be utilized in the drafted Policy and Practice Recommendations for local, national and macro-regional actors seeking to apply an integrated approach in the revitalization of urban space. Concrete piloting of integrated planning approaches and PPP-partnership models in real life conditions in Estonia, Finland, Latvia and Sweden and analysis of good practices will help to formulate a common approach for urban regeneration projects that will be transferable and beneficial to all Central Baltic cities. 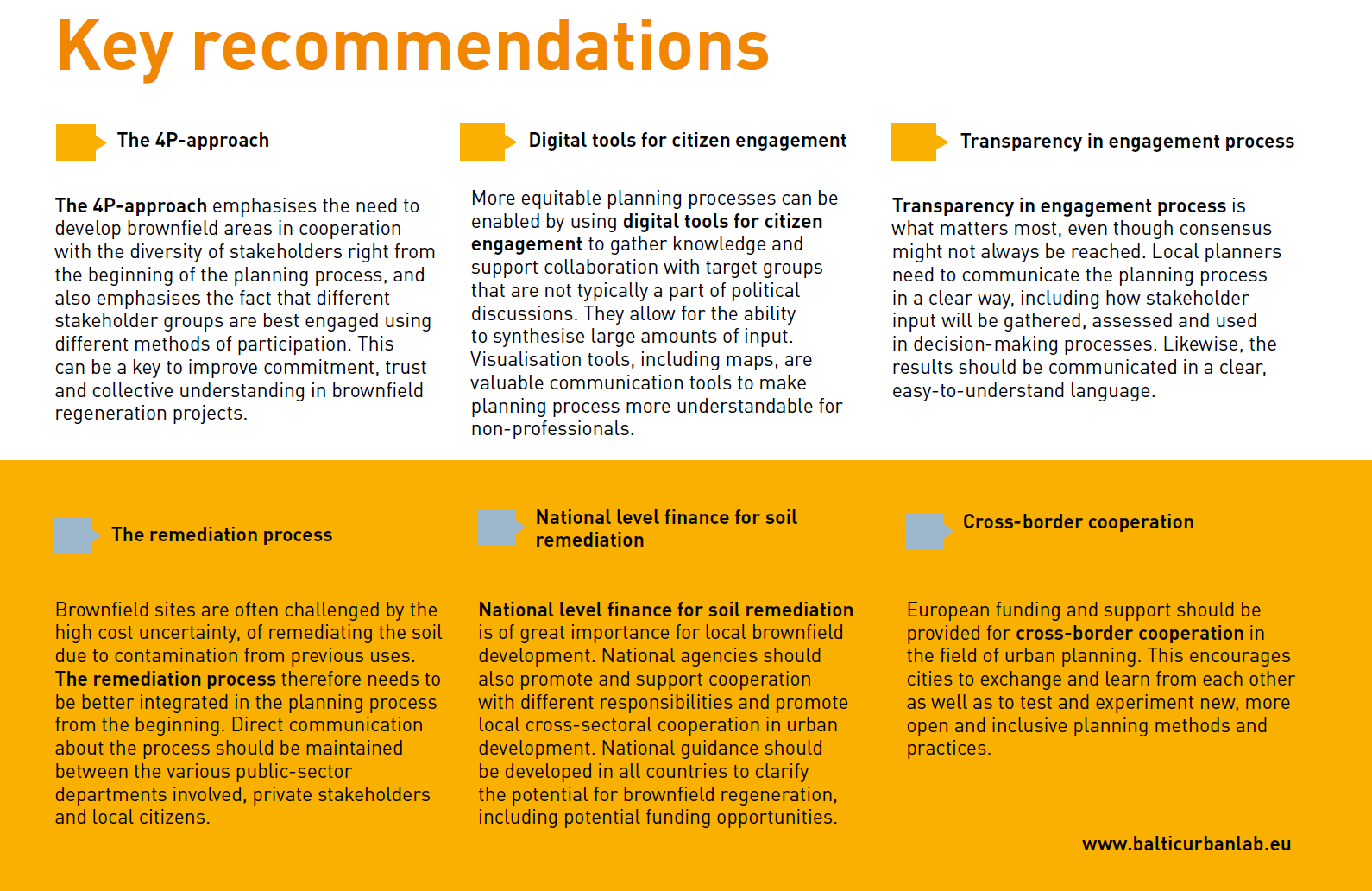