Since the Earth Autopsy launch back in December 2017, the visualisation tool has been presented to a variety of stakeholders and international audiences. Earth Autopsy has been developed by City of Norrköping in cooperation with a local company.

Norrköping launched their visualization tool giving professional and public stakeholders the possibility to see and interact with contaminations in a whole new way on December 8th 2017. The launch took place at the Norrköping visualization center where invited guests and media representatives learned about the project and got the possibility to explore the application. Since then, Earth Autopsy has been exhibited to the public at the science center where it will be accessible until the end of the summer, reaching approximately 200.000 visitors and among them about 25.000 students. Visitors to the science center will have the chance to be accompanied by the center's guides who have been specificially educated about soil contaminations, remediation and brownfield redevelopment.

It feels great to have realized an idea and now see that this technology works. And above all, it comes to be of great use. It's extra fun that we developed this in Norrköping in cooperation with a local company says Erik Telldén 3D-expert at the City of Norrköping.

Earth Autopsy has also been demonstrated and presented at various professional gatherings -  among them the international URBAN FUTURE Global Conference in Vienna attended by 3000 visitors, National Swedish planning days and National Soil remedation days – Renare mark,  which where held in Norrköping and attended by more than 600 professionals in the business of soil remediation. The visualisation tool got a lot of attention from the professional stakeholders leading to interesting discussions on the topic which indicated that the subject is interesting and urgent for several stakeholders and that many cities around the world are struggling with similar issues related to soil remediation.

“After trying the interface out I can truly vouch for that it fulfills the task of making it easier to understand soil remediation. I regard myself as having little or no previous knowledge of the topic. In the future, visual tools like this might be standard help for new environmental consultants in the field” says Martin – a visitor at Renare mark conference.

Norrköping has after a few months use definitely experienced the potential in the technique booth regarding dialogue and communication with citizens as well as in professional arrangements and project meetings.  There are many different companies and municipalities that have heard of our tool showing interest in the technology and wanting to know more. “ We have also been contacted by the company’s neighboring professions such as archeology and geotechnical surveys where the need for visualizing content underground is of great importance” says Erik Telldén. 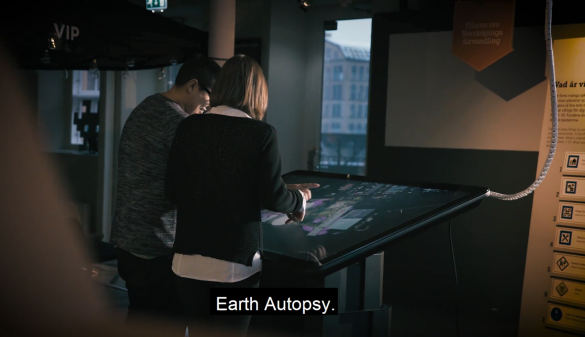