In the end of November last year,  Turku Science Park Masterplan 2050 was publicly launched. According to the Master Plan, the Science Park area will be developed as an international concentration of expertise and a showcase of top competence with ambitious objectives.

The Science Park area will be extending from the University Campuses to Kupittaa  and it will have significant role in supporting growth not only as a versatile concentration of education and research but also as an internationally significant centre of business and inviting living environment. The overarching goal of Turku Science Park Masterplan 2050 is to create guidelines for development in the upcoming decades and to create a vision of how the entity towards Itäharju will look like in the future.

Regarding the Baltic Urban Lab Pilot Site: the triangluar area in Itäharju, 90 hectares in size, will offer a platform for significant growth of the Science Park. Altogether, it is estimated that the area becomes renewed by 2050. And if the current pace of growth continues, the area may be constructed even faster. In any case, it is important that we have an optimal location and a significant reserve of very attractive development potential and opportunities for bold new openings. The future image has been built in vast collaboration including, in addition to the City of Turku, universities in the region, Turku Science Park Ltd, Turku Technology Properties, University Properties of Finland, the Hospital District of Southwest Finland and the Student Village Foundation of Turku. 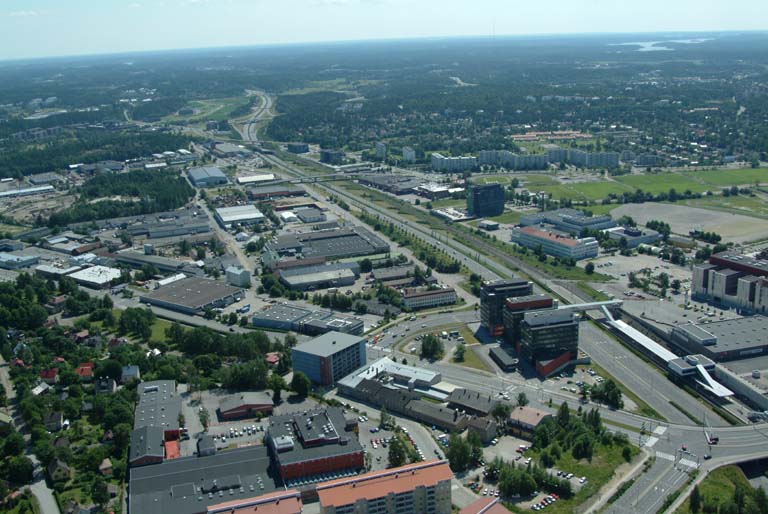 The current look of the Itäharju area.

- Through the Turku Future Forum workshops open to all, a large number of representatives of local businesses in the area, students, and experts in different fields have participated in planning the future of the area. In addition, discussions on the direction of development have taken place with resident associations in the area, says Project Manager Riitta Birkstedt.

The development of the area will continue also in the future with collaboration and diverse partnerships.  Development of the Itäharju extension area will proceed in phases as large entities. The first phase will include improving transport connections in the area and building a connection between Kupittaa and Itäharju that links the areas together. According to Timo Hintsanen (Director of City Planning in the City of Turku), in addition to functional basic infrastructure, technologies of a smart and sustainable city will be emphasised in developing the area. The Science Park is developed in intensive collaboration between different actors, with each one providing their own effort and expertise.

- The city for its part functions as an activator of development. It shows the direction, creates opportunities and brings actors together, says Birkstedt.

More on the subject: https://www.turku.fi/en/news/2017-12-04_future-image-turku-science-park-aims-bold-growth

Webcast from the launching event: http://vod.kepit.tv/turku41217.html (in Finnish)

The Masterplan of Turku Science Park has been prepared as part of the Campus and Science Park spearhead project set by the Turku City Council in 2016. The objective of the project is to strengthen the international attraction of the area and to combine functionality, land use, building and mobility into comprehensive urban development. Comprehensive development also strengthens attractive city growth and urban environment and the smart development of city service channels.