During this summer, Tallinn Urban Planning Department city planners together with GIS specialists developed and launched a new involvement tool to gather ideas and visions from the citizens for Northern Tallinn City District general plan. Baltic Urban Lab project’s Pilot Site is also a part of the district.

People were invited to share their ideas and proposals  on a web-based GIS map. Inserting the idea on the map was easy:

Everybody, including urban planners, could then read the ideas that were spotted geographically on the map. Idea gathering period has now ended but the collected ideas are all still visible on the website.

„In addition to gathering people’s ideas, we wanted to test how successful this kind of involvement tool will be and what kind of proposals people will submit through the web map“ said Anna Semjonova from Tallinn Chief Architect´s Office. „The wide interest for this kind of involvement method and the number of ideas we received through this shows that this method is needed and useful in urban planning practice,“ added Semjonova.

In total, 412 ideas were collected during the idea gathering period in July - August  2016. Ideas were received also for the Baltic Urban Lab project’s Pilot Site, although it forms only a small part of the city district.

The most popular suggestions indicated, for example, a lack of green areas and parks, a need for better maintenance of playgrounds, poor road conditions, problems related to traffic and parking management whereas some of the proposals confirmed that the developments in the city are heading to the right direction - e.g the need for better connections to the seaside, opening the city to the sea and using the full potential of the seaside.

In general, people want a human scale urban environment, a walkable city district with safe crossings and slow traffic. City Chief Architect Office is analyzing all the ideas and forwards the ones that cannot be solved through urban planning to relevant city departments for implementation.

Urban planners appreciated the positive feedback about the involvement tool and numerous ideas received. Even though many ideas regarded city district’s general maintenance, it clearly shows that the need for this kind of channel for dialogue exists and that there is a vivid interest among the people in improving their living environment. Urban planners will continue the useage of  this tool in the future for collecting the opinion of general public on city development plans. 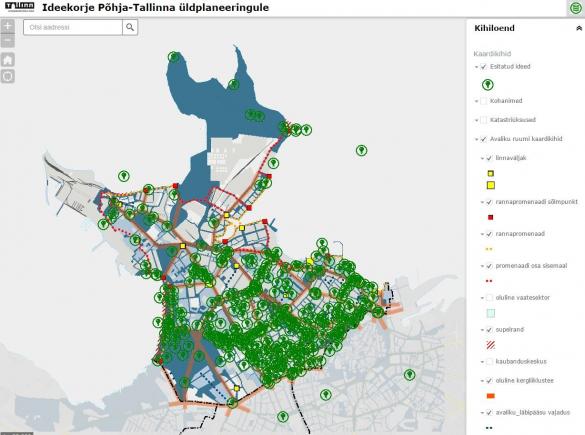