Risk seminar as a guide for decision making and updates on the development of a new visualization tool!

Progress is being made in Norrköping with the new visualization tool

In the Pilot Site of Norrköping, the development of the new visualization tool has been making great progress. The aim of this new tool is to improve the capability of municipalities to make complex and costly environmental issues such as soil remediation, adaptation to rising sea levels and handling changing ground water levels understandable to common people.

Since the tool is not yet fully developed and tested, it is not possible yet to show the results in a full scale. Yet, it is an ongoing technical development in which several fields of expertise are included - below you can see a preliminary illustration of a brownfield site,  showing where and how different kinds of pollutants are distributed in the soil as a result from former gas works

Example illustration. The user of the visualization tool can manouvre the picture in 3D. The user has in this case decided to sort out the contaminants of lead and made cross-section in the photo-realistic 3D map. The map was created by using drones.

Besides the activities regarding the development of the visualization tool, the Norrköping team also arranged a risk seminar with NGOs, national experts and developers. Around 30 participants took part in the seminar, where a certain risk assessment method was used to guide the decision making process regarding soil remediation. As a result, the seminar was seen as a big help to the Baltic Urban Lab team in order to narrow down the scope of the most important questions when it comes to soil remediation and on how to choose the right technology to reach soil remediation goals. 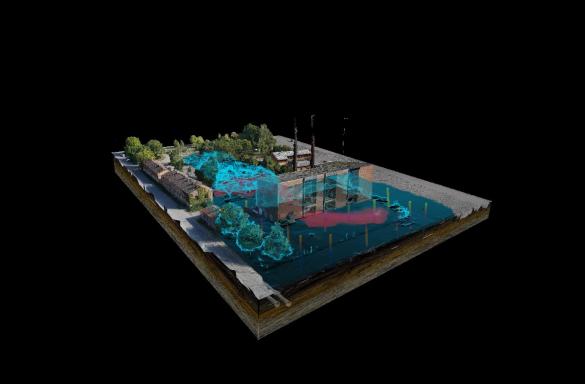