Bo01 in Malmö, Sweden, began as an international housing exhibition in 2001 and has continued to develop as a permanent neighborhood near the city’s historic center. Under the guidance of the city’s Property Development Office, a plan was created to redevelop this formerly industrial, waterfront real estate. With the participation of over 20 developers, the plan has led to the transformation of 18 hectares (44.5 acres) into a mixed-use residential community built according to sustainable principles.

Västra Hamnen area of Malmö has an industrial history. The area, including the site of the Bo01 project, was developed on land reclaimed from the sea in several stages since the mid-1800s for Kockums, a large Swedish shipbuilding company. Kockums began moving operations out of Västra Hamnen area during the 1980s. The large dry docks used for shipbuilding were filled in over time, with the last one filled in to make way for a new Saab plant in 1987. Saab also moved out of Västra Hamnen area in the 1990s and its plant buildings have since been adapted to function as Malmö’s convention center.

City leaders wanted to see Malmö recovered from the crisis and transformed from a working city to knowledge city. Recognizing the need to mark a definite move away from industrial decline, they opted for what has been described as “a radical vision of a modern eco city” to tackle the collapse of the city’s economic structure. A key component of the City’s emerging strategy was to focus on regenerating the reclaimed industrial site of Västra Hamnen.

The Municipality of Malmö had bought the site in 1996 with a view to developing an entirely new district overlooking the Öresund strait. The decision was subsequently reached to make the initial investment in residential development on the site by means of a housing expo focused on sustainability – Bo01 City of Tomorrow. The expo would have two components; 1) an exhibition exploring radical visions of future living intended to provoke discussion, 2) a best practice exemplar pilot project for a mixed district. This development would mark the first phase of the new sustainable city district and was to accommodate commercial and social uses as well as approximately 350 residential units by the time of the expo. The expo would showcase what was achievable in terms of designing, planning and building to the highest quality and energy efficiency standards. Design and construction would enable live testing of new sustainable methods and technologies for application on a wider scale.

Development rights for the area were advertised and sold to a series of private developers through the city’s Property Development Office during 1998. To be allowed to purchase development rights, developers were required to commit to participating in an association called the Owners’ Group that would develop detailed guidelines for building on the site. Another significant condition of the sale was that the city of Malmö would be allowed to approve the developer’s choice of architect. Twenty different developers purchased development rights and began work with the Owners’ Group. Nearly half of them purchased rights to at least two developments within the site. These included major developers in the area such as Skanska Nya Hem, LB Hus AB, NCC Boende, JM AB, Packwerk Bygg och Fastigheter, HSB, Wikeborg och Sander Fastighetsutv. AB, and MKB.

Representatives from Malmö’s City Planning Office and the municipally appointed exhibition architect Klas Tham joined the the Owners’ Group. The work of the Owners’ Group resulted in a document called the “Quality Programme Bo01,” which is a detailed supplement to the existing guidelines in the city’s overall plan. This document describes the final master plan, the guidelines for the physical development of individual plots (including requirements for sustainability), and, most important, the clear allocation of responsibilities among the city, the exhibition team, and the participating developers. Developers were therefore obliged to fulfill guarantees regarding the quality of architecture, materials and technology used throughout the development.

By using public investment as a lever in this innovative way, it was possible to demonstrate to the development community that sustainable place-making could be profitable. Profits were ultimately made on the sale of the Bo01 plots, which went back into the public purse. The expo succeeded in showing that such a development could work financially and has influenced a wider market change in Sweden. Bo02 was subsequently developed profitably by the private sector without public intervention.

The new local plan for Västra Hamnen, including the Bo01 exhibition area, was approved in 1999. This allowed the Property Administration Department and the Department of Public Works to begin cleanup on site, start construction of public services, and plot the individual building sites. The city of Malmö allocated plots to the developers who had purchased rights based on its judgment of the developers’ participation in the Owners’ Group and their selection of architect. The city’s criteria for approving architects was based on their level of experience in sustainable design and an assessment of the quality of the work their firm had built to date. The city felt that this would ensure both a consistently high quality of design and a strong commitment to sustainability. There were a few cases in which the city rejected a developer’s choice of architect on one or both of these grounds.

Also in 1999, a grant of 250 million Swedish kronor was earmarked by the Swedish government through the “Local Investment Programme Fund” for use in the Bo01 project. These funds were used primarily to offset expenses associated with site cleanup and implementation of some of the more expensive infrastructure elements required to attain the ambitious goals for sustainability. Finally in 1999, the European Union granted € 1.5 million in economic support to be applied to the renewable energy elements of the project.

Construction began in earnest in March 2000. Due to the fact that revenue would not be generated until after the exhibition opened, by the summer of 2000 the Bo01 AB company had run into liquidity problems. To solve these problems, the company borrowed 40 million kroner from the city.

The international housing exhibition opened on May 17, 2001, and ran through September 16, 2001. A lively and well-functioning neighborhood, the site continues to be a catalyst for further development in the Western Harbor area. However, at first the project was not warmly received by residents of Malmö. Over time, however, the waterfront’s public spaces and cafe’s have become a draw for residents of the wider Malmö community. The city has adopted approaches to accomodate public use of the common areas where possible, in particular having created good conditions for swimming.

For residents of the area, the fact that the dwellings in  have large areas of glass, some facing the sea, means that the residents of Bo01 have to cope with hefty heating bills.

There was also a total lack of affordable housing incorporated in the initial site.

Despite Bo01's ambition of creating mixed forms of ownership to reduce the risk of ghetto formation, the residents of Bo01 constitute a homogenous group. The district has been criticised because it is only home to well shod, healthy, white residents despite the fact that 40% of Malmö's population was born outside Sweden. The lack of diversity is due to the high price of homes in the district; a three-room flat in Bo01 starts at around SEK 2 million (GBP 170,000), which is more than twice the national average price. The City did however proceed to develop the neighbouring site Bo02 with 70% affordable housing.

The affluent lifestyles of many inhabitants also had other unforseen consequences. For example, a higher car ownership than anticipated meant a multi-storey carpark was subsequently built in the area. The rentable electric car fleet that was available to residents never took off, and the scheme was eventually withdrawn. Overall however, parking provision per household sits at a ratio of 0.7 compared to wider Malmö’s average ratio of 1.1.

Much of the experience gained in the Bo01 project, both positive and negative, is being directly applied to further development in Västra Hamnen area of Malmö. Positive experiences include the success of the exhibition form of development as both a marketing tool for the city and a catalyst for attracting further development to a particular area. The incorporation of green elements in the individual projects beyond basic landscaping at the ground level of exterior areas proved to be a success as well. A most significant positive experience was collaborating on and achieving a shared vision of sustainability among companies and organizations with different goals.

Challenges experienced in the project include tensions between municipality and private developers. The amount of control exerted by the municipal planning side made it unattractive for some developers. Also, monitoring and evaluating the success of the sustainable systems continues to be challenging due to complexity and cost. Moreover, another challenge has been determining the amount of space needed for parking. Some critics have suggested that demand for parking was underestimated.

The Bo01 area, which was built for the European homes fair in 2001, was the first stage in the trans- formation of Västra Hamnen into a mixed-use built urban environment with homes, workplaces and services. The living urban spaces are combined with modern architecture and strict sustainability requirements. Approximately half of Västra Hamnen has now been constructed and the entire area is expected to have been fully developed in twenty years.

At the beginning of 2014, the area had around 4,000 homes and approximately 10,000 jobs. The plans entail a total of around 11,000 homes and 17,000 jobs throughout Västra Hamnen. There will also be three schools and around fifteen preschools. Just over 20,000 people will be able to live here.

At present, it is mainly the eastern and western parts that are built on. Just over half of the area has current detai- led development plans. The planning initiatives are now focused on the southern and central parts to link Västra Hamnen to the centre of Malmö. The last development area is Galeonen, which is located at the very north of the area.

After 10 years of development, the City of Malmö conducted a halfway evaluation of Västra Hamnen in 2011. The work was done to evaluate Västra Hamnen as a whole and thematic is- sues concerning transport and greenery and the physical sub-areas in Västra Hamnen. The evaluation forms the basis of the new, updated vision for Västra Hamnen.

In the first stage, Bo01, energy use was higher than expected. Since then, the focus on energy use in buildings has increased and, in Fullriggaren neighborhood, which was built in 2010-2012, as many as 200 of the 600 dwellings are passive houses. The preliminary evaluations also show that the actual energy use is closer to the target than in the earlier stages.

The experience of residential development in Västra Hamnen was also conceptualized through Miljöbyggprogram SYD (Green Construction Programme SOUTH), developed via a partnership between the City of Malmö, the City of Lund and Lund University. Miljöbyggprogram SYD is pri marily aimed at developers who  want to build on municipal land  and is applied to the construction of new housing and busi ness premises in Malmö and Lund. The  programme is incorporated in the decisions and agreements signed between the parties in connection with land allocation or other types of agreement (although not land development agreements). 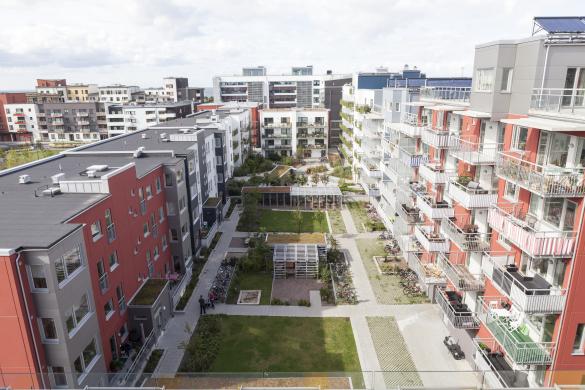