Revitalisation of Spīķeri block in Riga

The project territory was derelict area located in the central part of Riga between Maskavas, Krasta and Turgēņeva Streets with one part of the block bordering the heavily-trafficked road that runs on the bank of the river Daugava. The territory was known also as Spīķeri (means ‘warehouses’) block because the area consisted of warehouses mostly from the 14th century. 13 warehouses in the area, included in the UNESCO World Heritage list, were built in the 19th century. Spīķeri has also been used as a soviet military base. The land is owned by the City of Riga, but most of the buildings are owned by the private company called ‘Spīķeri’. The length of embankment of the area is 1.3 kilometers.

The project aimed to revitalise the derelict area focusing on the public part of the infrastructure of the Spīķeri block, by turning it into a public area for culture, education and entertainment activities for inhabitants and visitors. In addition, the reconstruction of the bank of the River Daugava, which flows alongside, was included in the project to improve the accessibility to the river bank through a pedestrian tunnel built underneath the busy road.

Development of the Spīķeri Block required a public-private partnership between Riga City Council and NGO ‘Rīgas Spīķeri’ representing the private owners of the buildings and the tenants – enterprises and NGOs – of the block.

Overal, the methods and the implementation of the project followed the general internal processes of Riga City Council. However, new approaches were used to activate and involve the private sector partners in the process. They were allowed to initiate and define the strategic directions of the project and other development activities. Furthermore, the private owners of the buildings used the same approach with their tenants – enterprises and NGOs – when planning activities by offering new opportunities for them instead of deciding on measures one-sided.

There was no need to develop a specific dissemination approach to communicate about the project results. The events organised in the Spīķeri Block spoke for themselves and attracted people. Culture and entertainment activities attract all the time more and more visitors and people could see the actual changes in the area and support investments for further improvements.

Discussions between private and public partners on developing the Spīķeri Block were started already in 2005. Over the time ‘Spīķeri’ company together with the other tenants of the block – enterprises and NGOs –established an NGO ‘Rīgas Spīķeri’ that represents the interests of the private partners in relation to various development activities in the block. The tenants are involved in the project through their membership of the ‘umbrella’ NGO ‘Rīgas Spīķeri’.

During the project, Riga City Council organised public consultations with the participation of ‘Rīgas Spīķeri’ where the opinion of tenants were noted. The opinions were taken into account during the project implementation. For example, the block’s technical aspects were adjusted responding to the needs of the tenants.

The project has also taken into account the opinion of the project’s indirect beneficiaries – the wider group of inhabitants in Riga. The block and the adjoining riverbank have been developed as an area for culture, entertainment, education and recreation, following the results of a public poll carried out in 2006.

The main challenge was to identify an extra €2.5 million needed for the reconstruction works that was not foreseen in the original budget, but which appeared during the technical development of the plan. The additional funding enabled higher quality for the revitalization than originally planned.

In the project it was learned that it is important to have a clear development strategy before implementation of large-scale and complex projects. It is also necessary to work with the wider public from the very first days of project and the planning process, ensuring a two-way communication. To avoid unexpected increase of total budget detailed technical elements should preferably be developed before preparing the project proposal to attract funding.

There is a potential to change public-private partnership cooperation from a more formal approach into a more practical way of cooperation and equal co-leadership. Also more active involvement of the private sector in elaborating and implementing EU-funded projects is needed. 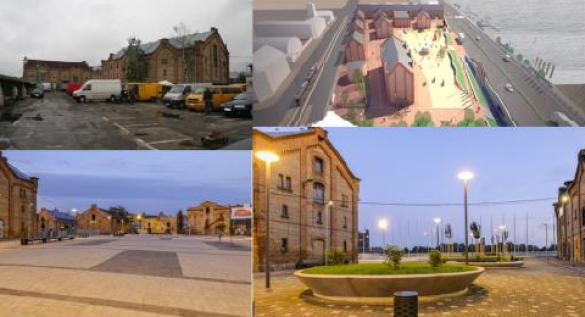 Project was financed only by ERDF and Riga City Council’s budget. At the same time the overall development of the Spīķeri Block involved a number of different funding sources attracted by the city (project CO2OL Bricks funded by the Baltic Sea Region Programme 2007-2013), private owners of the buildings (Programme for Support of Private Owners of Cultural Heritage Objectives financed by ERDF) and by the tenants of the block – enterprises and NGOs – through various small scale ‘soft’ projects funded by the EEA-Norway Financial Instrument, the Ministry of Culture of the Republic of Latvia, the State Culture Capital Foundation, Riga City Council and private commercial banks.

All these projects were supplementing each other following the development strategy of the Spīķeri Block and do not overlap, owing to the clear division of ownership, interests and functions of different stakeholders within the block.