Vulkan has been a vibrant industrial area since the Middle Ages and up to the foundry production ended in 1960s.  Around 10 years ago, property developers Aspelin Ramm and Anthon B. Nilsen bought the Vulkan area and started the development of what was to become a thriving new area in the heart of Oslo.

Vulkan is a full scale example of sustainable urban development, based on the sharing of localities, resources and energy in a dense and multifunctional area – telling it’s story in different ways, through buildings, monuments and legends.

The buildings on the site date back to the 1900’s. The foundry specializes in steel bridge by rail and road but is also known for the dome of the old Colosseum cinema. Boats, stoves and others were also built in steel.  The period approx. 1960-1996  constitutes an intermediate phase for the Vulkan area and when Akerselva Environmental Park was adopted in 1985 , the area had been used for warehouses and premises for craft companies since the 1960s.

In the late 1990s, the prestigious industrial halls were proposed integrated into Stattsbyg’s large scale co-location project for the National Theatre, Concert and Exhibition. After this process was given up, the property was put for sale. Property developers bought the Vulkan area and started the development of what would become a new and vibrant area in the middle of Oslo following a comprehensive plan by LPO architects.

The objective was to turn Vulkan into an attractive area by building new constructions and transforming already existing buildings into housing, educational spaces and venues for restaurants and cafés. An important part of the objective was also to connect Vulkan to the surrounding city by innovative urban planning and zoning.

Vulkan is a place for creative businesses, schools, hotels, housing blocks, offices, restaurants, cafés and other spaces for cultural and sport activities. Vulkan has been regenerated in a sustainable and environmentally friendly way being almost self-sufficient with energy for cooling and heating the buildings. This is possible thanks to Vulkan’s common power plant which distributes heating and cooling according to the needs of the buildings. E.g. excess heat coming from a food market’s cold storage is used to preheat water.  The Scandic Vulkan hotel is Norway’s only hotel with energy rating A, also Oslo’s only office building (Bellona) with energy rating A can be found in Vulkan.

In Vulkan one can find urban beekeeping on the rooftop of the Dansens Hus building. There are two artificial beehives which serve as dwellings for urban honeybees. In summertime it is possible to by Vulkanhoney in the Vulkan food market, something which harmonizes with the objective of Vulkan being self-sufficient 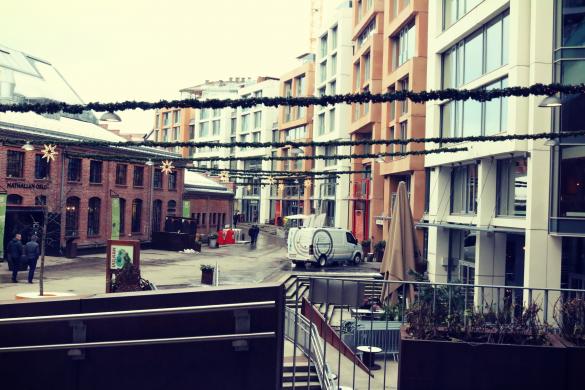