The Municipality of Norrköping was planning a new vision for the industrial landscape, a brownfield in the heart of the city. Since the Industrial Landscape is an important part of Norrköping’s identity and pride, the municipality wanted its residents to get involved. The aim was to create a new vision together. Norrköping believes that to plan a good city for all the broad public needs to be involved– not just a few strong individuals. Therefore, taking part in the planning process should be easy for everyone despite of age, gender, ethnicity and socioeconomic status. Therefore it was important to create new ways in communicating; reaching out to the broad public explaining city planning in a way so that everyone could take part. Usage of 3D-aerial photos was tested in order to make the city planning accessible to the broad public. The planning department of Norrköping’s municipality was responsible for the project with strong involvement of politicians throughout the project.

A dialogue was initiated with the help of an extremely high resolution 3D-aerial photo of the city. As many people have difficulties reading a map the aerial photo made the information a lot more accessible and easier to understand. People could easily familiarize themselves in the aerial photos as the streets and buildings looked the way that they were used to.

The 3D-photo was then used in two different platforms – Urban Explorer and City Planner. Urban Explorer is a read only interface whereas Cityplanner enables the user to add information such as text, photos, sketches and even 3D-models. That way the user could add a suggestion, for example a new building, describing it in written words, adding a photo, drawing a sketch or even uploading a 3D-model of the building.

To access Urban Explorer the citizen needed to visit one of the 2 touch screens which are located in different forums in the city. However, Cityplanner was accessible to all online, 24/7. This made Cityplanner a great way of communicating as the user could visit Cityplanner regardless of time whenever it suited for them the best.

The citizens where invited to give their input on the entire brownfield area but the planning department had also added a few special focal points. These focal points contained more information and questions about possible uses for the specially selected area were asked.

The project was communicated through word of mouth, local media, Norrköping’s webpage and Facebook account. It was also communicated face to face at several events such as a housing event and a Christmas market.

The result was overwhelming. Over 400 people gave their opinion in Cityplanner giving the planning department invaluable information on what the public wanted. The demographic coverage was also a lot better than usually as young people and women took part more frequently than in prior projects organized by the planning department.

Urban Explorer and City planner is still used in Norrköping and the city plans to develop Urban Explorer even further within the Baltic Urban Lab project. The plan is to visualise in 3D below ground level. That way the public can be shown what can be found underground level in relation to city planning, for example it makes contamination visible. 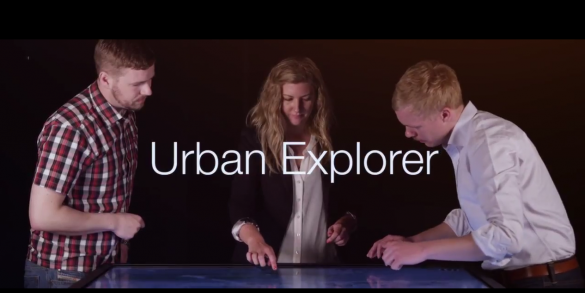 The activity was funded by the city of Norrköping