Hiedanranta - smart and sustainable city district of the future in Tampere

The history of settlement in Hiedanranta goes back to medieval times, when the village of Lielahti was situated here. A rustholli, a manor with the duty to maintain a cavalry soldier, was formed of the houses of the village in 1682. Wilhelm von Nottbeck, the owner of Finlayson, bought the manor from his heirs in 1872 and made it his country- and summer house. The son of Wilhelm von Nottbeck, Wilhelm Fredrik von Nottbeck, transformed the estate in to an up-to-date model farm in the 1890s. The buildings in the area were renewed and a new mansionlike main building was built in 1893. It was surrounded by parks, gardens and buildings to accommodate the staff and workers. Also situated in its grounds was the Nottbeck family cemetery, which is the final resting place of ten members of the family. The Nottbeck family owned the manor until 1904.

The transformation into a factory community in Hiedanranta began in 1913, when the company J. W. Enqvist Oy bought the estate and established a sulfite cellulose factory there. In the 1930s it was sold in to French ownership and its expansion waned due to worldwide economic depression and war. In 1965 the company A. Serlachius Oy bought the factory to expand its own industrial production. In the 2000s M-Real became the new owner of the factory. Industrial production in the area was discontinued in 2008.

In 2014, the former Lielahti is bought by the City of Tampere.  The Hiedanranta Development Programme is in charge of the development work. The Development programme has been divided into three sections: 1) Planning of the City District, 2) Development Platform and 3) Temporary Hiedanranta. The new city district of Hiedanranta will have three areas: the centre, the Lake City and the New Lielahti area. Hiedanranta also serves as a development platform for experiments and projects that promote smart technology, sustainability and circular economy - for example, Urban Nature Labs and Hiedanranta MaaS (Mobility as a Service) are currently the topics in Hiedanranta.   Whereas, Temporary Hiedanranta is a place for citizens, businesses and communities to develop a vibrant, versatile and sustainable urban culture. The old industrial area Lielahti has been opened for people, events and activities.

Tampere City Board approved a structural plan for the new Hiedanranta district in December 2017.  Hiedanranta's new centre will be built next to the old factory. The structural plan drawing the initial plans for land use in the area has the tramway running through the old factory complex. The tramway will be built in two phases.  The tramway route will ensure that the compact Hiedanranta centre will develop according to plan. Routing the tramway through the factory has been deemed necessary to ensure that old industrial area in Lielahti can be developed and built into an attractive location for culture, business and services. The construction of Hiedanranta creates great conditions for development of Lielahti, and the two areas combined form a well-functioning, high-quality district centre. The main idea of the structural plan is a diverse and versatile block structure that allows flexible development. Public spaces connect Hiedanranta with other district centres - the space also includes most important public functions and sights. The green network ensures that extensive green areas and waterways are never more than 5-minute walk away.

Temporary uses of Hiedanranta have made the area more familiar to the locals in Tampere with around 12.700 visitors to the area and events in 2016. The visitor number grew by approximately by 4000 people in a year. Furthermore, artists and crafts people have taken the area as their creative hub as around 20 creatives are based in the Hiedanrannan Paja. 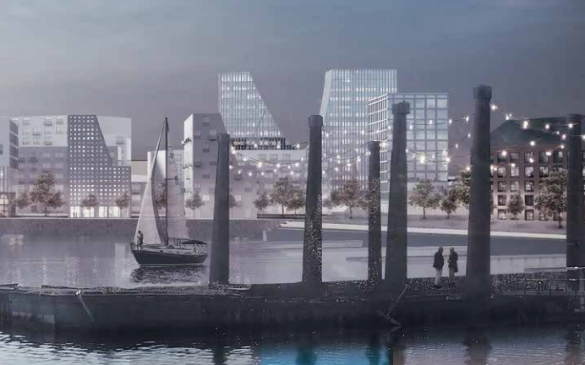