2009-2011 Pilot study and establishment of collaborations

2018 Demolition of the old factory building

Fixfabriken is an urban planning project located in the Majorna district in Gothenburg, Sweden. Fixfabriken is a part of a bigger project called BoStad2021 which aim is to provide Gothenburg with 7000 new accommodations by the end of 2021. Due to increasing residents and lack of accommodations the City of Gothenburg is cooperating with both private, cooperative and public construction companies to solve the housing shortage. To actualize Fixfabriken the city of Gothenburg is cooperating with cooperative association HSB Göteborg and real estate company Fastighets AB Balder. To get external input workshops, study visits, interviews and discussions with citizens and companies have been carried out. Building sustainably is high priority for the Fixfabriken project. At this stage of the regeneration process it is still too early to talk about a specific environmental certification level.

The objective of Fixfabriken is to transform a former industrial area into an attractive residential housing area and thereby relieve the housing shortage of Gothenburg. In other words, fulfilling the objectives have both an urban redevelopment and political aspect.

To engage citizens and other stakeholders four so called dialogue workshops were organized in 2014. The consultant group Radar arkitektur & planering AB were in charge of leading the workshops. Attending the workshops were inhabitants of Majorna, other citizens and associations active in the district and pupils from an elementary school in Majorna. The attendees were informed of the project framework and how they as citizens can impact the development of the project through participating in the workshops. The workshops resulted in four narrative maps describing living in Majorna and how it could be improved. The narrative maps have been used as background material in further discussions with stakeholders and construction companies.

The old industrial building has been demolished and the site has been decontaminated. Constructions are expected to start in spring 2019. 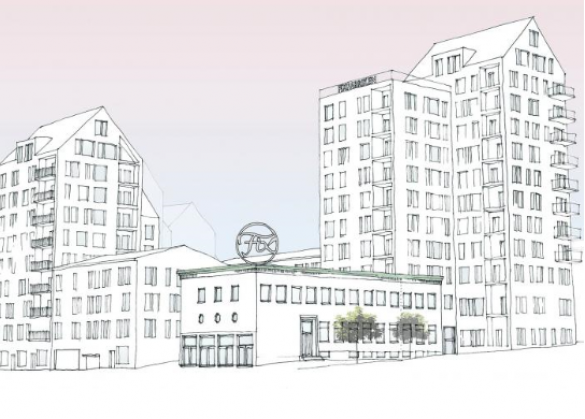 The process has primarily been funded by the City of Gothenburg in cooperation with several different companies through the master project BoStad2021. HSB Göteborg and Fastighets AB Balder have together established Majornas Projektutveckling AB (MPU) which in turn owns the Fixfabriken lot.