Tallinn is the capital and largest city of Estonia. Tallinn occupies an area of 159.2 km2 and has a population of 440,043. Tallinn main street project aimed is to redesign city space and create a modern, human scale main street by 2018 that is the 100th anniversary of Estonia.

Project was inspired by the countless examples from around the world where the domination of cars has been resolutely reduced and a shared urban environment created instead. This has had the effect of enlivening urban culture as well as local trade and services, and of bringing people out of their cars – even in northern climates. Today, Tallinn’s main street is a thoroughfare that has been planned for five decades with just one idea in mind – the increasing number of cars, pedestrians should make way. Thus, the Old Town has been cut off from central Tallinn by main roads. The best places for lively cafes, street life and just passing time are unused, as pedestrians and bicyclists have no easy and safe access to them.

The experience of world metropolises also shows that giving preference to light traffic and public transport at the expense of car traffic will not result in traffic chaos, as has sometimes been feared. What has, however, increased enormously in these areas is the satisfaction of local inhabitants with the urban environment, and the visiting rates and earnings of local businesses. A model analysis ordered by the Centre of Architecture confirms that it is possible to direct a large part of transit traffic away from the heart of the city without causing major traffic problems.

Estonian Centre of Architecture (non-profit institution) is in charge of the Tallinn Main Street project and citizen participation. Redesigning urban space and creating a human scale main street is in accordance with the city development documents. Local politicians support the Tallinn main street project as it is a measure to obtain the title of European Green Capital 2018.

An architectural competition will be organized to gather ideas for the development. The main street idea competition is the first stage of the project to develop a mobility area between the Old City Harbour and the city centre, with the aim of creating a people-centred and modern urban environment in the heart of Tallinn by unifying the fragmented centre of Tallinn into an integral whole. The entire main street project comprises the stretch of Pärnu maantee in the centre of town and the beginning of Narva maantee in the other direction. Adjacent blocks will also be included in the second stage.

The architectural competition is being organised as a partnership between the Estonia 100 architectural programme Great Public Spaces, curated by the Association of Architects, and the development project for a mobility environment between the Old City Harbour and the centre, which is funded jointly by the City of Tallinn and the European Cohesion Fund. Both projects mark the Centenary of Estonia (Estonia 100).

The winning entry will be used as a basis for the further design and construction of the main street area.

Project management encourages people to comment and discuss on different ideas related to Tallinn main street . From time to time new topics arise therefore stickyworld is a place for ongoing discussions. Information on the project is shared via the project website,  Facebook and Online citizen participation tool Stickyworld.

The winning entry from architectural call for ideas will be used as a basis for the further design and construction of the main street area. The Tallinn Main Street public space solution will be developed in full or partially by 2020 within the Estonia 100 programme, using funds from the European Cohesion Fund and the City of Tallinn. 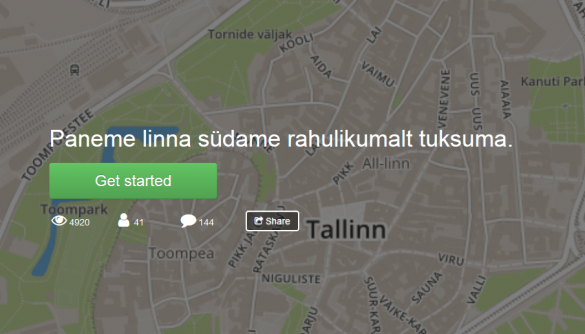