Mukusala territory is characterized by a commercial, industrious and corporate identity. Throughout history this identity has been displayed through value creation in its varied forms: from woodworking and agrarian industrialization of the 19th century to industrial manufacture and workshops during the years of planned economic development. Since the country’s independence and especially in the more recent knowledge mile of Pardaugava context, a new identity is being searched for the area of Mukusala, with a need to retain the area’s special and robust image.

During the last 5 years it has seen a steady transformation of its degraded areas into office spaces and business functions. In this period, the number of people working in the area has multiplied ten times. Moreover, University of Latvia has chosen Mūkusala for its new academic campus, with the first campus building finished in 2016, the second one finished in 2019, hosting more than 7000 students and academics. By the same year, it is expected that the Baltic Rail Baltic transit infrastructure will connect the area to the city center and the airport by rail transit. Currently, the strategic potential and unique geography of the site is not used to its capacity. To this end, the area needs public-private partnerships to create a more dynamic housing market, improve the state of public outdoor spaces and mobility services.

Territory of Mūkusala (including Mūkusalas Street, Bieķensalas Street, Jelgavas Street and railway) (Figure 1) is part of neighbourhood Torņakalns in Riga. Torņakalns is located on the west bank of the Daugava River with a view to the Riga Historical Center and is situated between two bridges - Railway bridge and the Salu bridge. It covers around 0.5km2 (50 ha). The Pilot site can be reached in 3 minutes by car and in 10 minutes by public transport, but walking time is around 20 minutes from the Old Riga. Airport is 20 minutes by car (40 minutes by public transport) from the site.

The main challenges in the development of the plan is the fragmented land and building ownership structure in the area and a lack of coherent development vision among the stakeholders. Secondly, the area is engulfed by high intensity traffic infrastructure with private traffic and substantial cargo traffic flows, which significantly limit the access to the riverfront and other destinations in its proximity. Thirdly, whilst both the office and higher education sector have seen substantial increase during the last years, the number of inhabitants remains to be very low and lacking in density.

The objective of the project is to improve urban planning by developing and testing new integrated planning and Public-Private-People partnership models for the regeneration of the Mūkusala brownfield area, which are considered an opportunity but also a challenge.

To achieve objectives different methods during project were used such as traditional survey for Mūkusalas territory local inhabitants and entrepreneurs and other stakeholders where important results were achieved to carry information about existing situation. Different events were organized to raise awareness for example Clean-Up Days in 2016 and 2017 where the stakeholders were told about the project and Mūkusala perspectives. Most important activities and results were achieved during stakeholder meetings/workshops, meeting with Landowners, entrepreneurs, inhabitants Workshop with “Dreamers” and “Problem solvers”, and Mūkusala 2050. Also, digital methods used to reach different stakeholder groups. A online survey was organised for Mūkusalas inhabitants and entrepreneurs. For distributing project results,  most important method was social media - especially two-way interaction with the stakeholders on social media platforms.

Most important new method for Riga City was student competition -  to find new and fresh ideas for the development of the Mūkusala pilot site, but also to test new planning methods. Multidisciplinary student teams consisting of architecture, spatial planning, transport engineering, landscape architecture, geography, environmental science, sociology, culture, economics and communication students from three Riga-based universities were invited to participate in the six-month competition. The task was to come up with a development proposal for the pilot site, taking into account the results of baseline analysis and the feedback and ideas collected from different stakeholder groups. The competition was supervised by a local architect’s studio. The jury, consisting of people from different City departments, users of Mūkusala territory, and several professional architects and landscape specialists, selected the final winner. The City was very satisfied with the competition that produced three innovative proposals for the Mūkusala pilot site development.

2. Most important outcome is  Mūkusala Development Action plan where different activities are selected until 2020, Midterm until 2025, Long term until 2050. The Action plan is a platform for encouraging stakeholders for implementation activities. Activities in the action plan are prepared both for private and institutional stakeholders. The Action plan consist of seven thematic parts (Kileveina dich revitalization, Mobility and transportation, Common build environment and public space, Strenstenging communities, Social infrastructure, Physical infrastructure, Contemporary planning and cooperation). The Action plan is part of the Riga City Strategy Monitoring System.

Mūkusala area development concept gives for Mūkusala a new identity. Commerce, education and affordable housing are the three main development vectors which stem not only from the brief given by the city and government, but also from the aspirations and needs of local citizens and foreigners alike.

4. Cleaned the area during Clean-up days 2016 and 2017 from the Railway Bridge to Bieķensalas Street and from Mūkusalas Street to Jelgavas Street;

5.More activated stakeholder groups which are more interested to promote Mūkusala distric development and cooperate between. 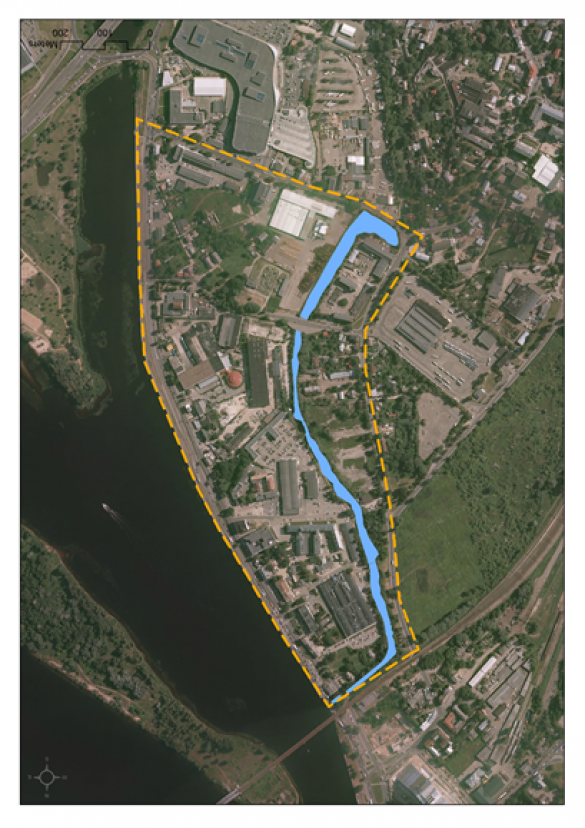