Alby Public Health Park was initiated and brought to reality by Culture, Leisure and Recreation department of the Botkyrka Municipality in collaboration with Konyaspor - Sports and Culture Association (a local association). In 2013, National Board of Housing, Building and Planning (Boverket) released a financial support for development projects with the aim to create gender equal environments in cities. Botkyrka municipality and Konyaspor applied for this funding, specifically targeting women in different age groups in the framework of gender equal city environment.

The municipality has engaged various groups in a process where they have researched what functions in the park that these different groups would like to see. The project used three reference groups for ensuring the opinions of the female residents:

The decoration work of the Alby Public Health Park was done by 6 local artists as well as by girls from local primary school grade 4-6 (age 10 to 12) decorated some furniture in the park with tile.  Boys from a local sports association collaborated with an architect to design the outdoor gym. Other stakeholder groups that were involved were: Local parents’ association and local association for the retired people.

The Alby Public Health Park was developed by the following methods: reference groups, meetings with associations and users, co-creation and co-governance.

As a result, nowadays the park offers a big variety of activities that can be used for spontaneous sports. Earlier observations in Swedish research show that users of that kind of public out-door sports facilities have mostly been boys/men (75%). Observations in Alby Public Health Park have shown that the park is today being used equally by girls/women (45%-50%) and boys/men, even though girls and boys somewhat differ in which activities they perform.

Some of the facilities offered in the park:

Various Swedish municipalities have visited the Public Health Park, and at least one municipality has shown clear interest in conducting a similar process. 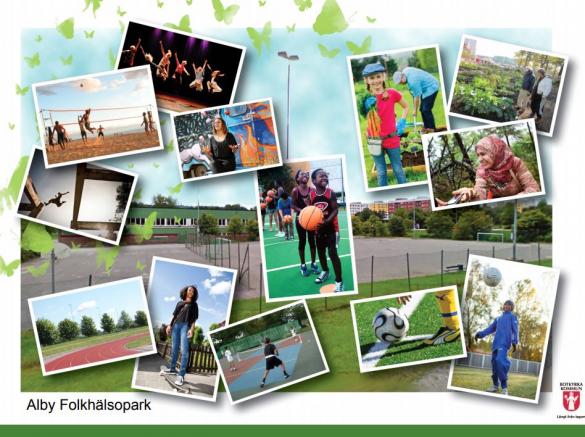