Norrköping faces a major challenge when the inner harbor is being transformed into an integrated part of the city with new homes, canals, baths and parks. The land is among the most polluted in the country and the rehabilitation measures are estimated to cost up to SEK 450 million. The acceptance and comprehension of the public and decision makers for the complexity and extent of the problem is a key success factor. What has been done yesterday, we need to take care of today, it is both costly and time consuming. Insights can motivate work to shape tomorrow's cities towards becoming more sustainable. A major challenge in the work of pollution is to explain and educate both public and professionals in an educational way that does not come into contact with these issues daily, pollutions ar in many cases abstract and hi8dden underground. Using visualization, complex questions can be explained using images.

In December 10th 2017 Norrköping lunched their visualization tool Earth autopsy giving professional and public stakeholders the possibility to see and interact with contaminations in a whole new way.

Since then then application has been exhibited to the public at the science center where it is accessible to the end of the 2018, reaching approximately 300.000 visitors and among them about 40.000 students. Visitors to the science center has the chance to be accompanied by the centers guides witch has been specially educated about soil contaminations, remediation and brownfield redevelopment.

The purpose is for different stakeholders - citizens and schoolchildren to know the city's history and understand why the soil is contaminated. How the pollutants are spread in the soil and how the soil will be cleaned from contamination, but also feel confident that the remediation is carried out correctly and that Inner Harbour becomes an attractive place to live and live on in the future.

In the EU project Baltic Urban Lab and with the newly developed Earth Autopsy tool, Norrköpings Municipality unites drones, georadar and drill samples with technologies commonly used in medical visualization and exhibition technology at the world's major science centres, into an exciting interactive application accessible to the public at visualization center C.

The tool is a new invention and the development has followed this steps:

Norrköping has after a few months use defiantly experienced the potential in the technique booth regarding dialogue and communication with citizens as well as in professional arrangements and project meetings.  The tool has eased up the dialogue and provided a good communications platform as well as raised awareness for pollutions.

Further neighboring professions such as archeology and geotechnical surveys has after seen the Earth autopsy tool expressed the need for visualizing content underground. Further steps will be taken to improve the software so it also can be used in such occasions. 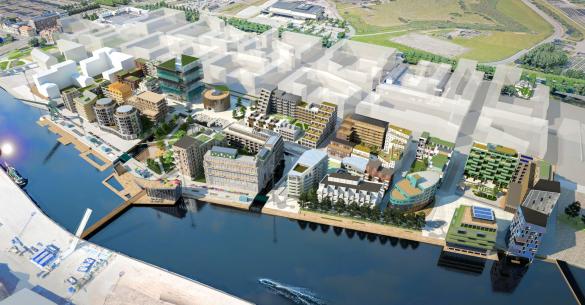